It’s drizzly and dark, and I’m waiting for the next Straßenbahn (tram).  Carrying a quiche, still warm from the oven, I’m hoping to get it to church for tomorrow morning’s Easter brunch without being dampened by the elements.  In my hurry along a routine route, I am surprised when, glancing up, there is the opera house.  Suddenly, it’s a priceless I-live-in-Vienna moment — no tourist carries a quiche past the opera!

You know you live in Austria when…

…you are walking through the subway and notice a group of young people dressed in Lederhosen and Dirndl.

…you routinely rattle off names like Schwarzenbergplatz, Lichtensteinstraße, and Niederösterreich.

…at an Easter market you can find literally thousands of painted eggs.  (I bought one with a globe motif.) 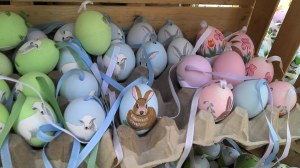 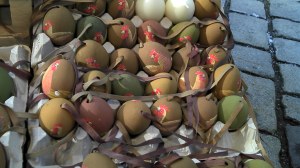 …the plaza in front of the city hall hosts a yearly Steiermark (one of the provinces of Austria) festival, complete with lots of traditionally dressed musicians with a penchant for accordion. 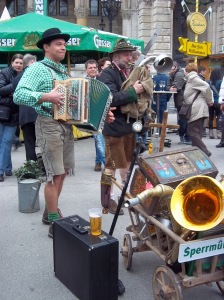 …when you discuss the differences between a Viennese and French oboe with one of the German and Russian teachers on the way to work.

You know you are not in Tennessee when…

…instead of thinking about which route to take to avoid road construction, you weigh which end of the train to board in order to end up nearest your desired exit at the next station.

…you perk up upon hearing an American accent in the train or on the street.

…half of your “you know when” comments have something to do with public transportation.

Easter Sunday was a wonderful day!  It started early, and not just because Easter Sunday coincided with Daylight Savings.  I woke up at 4:00 a.m. at the home of one of my colleagues from Keimgasse. She’d invited me to join her and her family for their church’s 5:00 a.m. mass, and there weren’t any trains that early from Vienna to her home in Baden.  If we were expecting a crisp morning warmed by a glorious sunrise befitting the day, we were mistaken — when the service was over, and we headed downstairs for breakfast, what should we see but a thin layer of snow outside.  Oh, dear!  It was funny — well, either funny or depressing, and not the day for gloom!

The service itself was a good experience.  I enjoyed the lively, contemporary music (Angelika sings with the band) — not quite what you expect from a typical Catholic service!  Also, there were lots of unhurried Scripture readings — three from the Old Testament (Genesis, Exodus, Isaiah), a Gospel reading, and a reading from the Epistles.  Who needs a sermon after an inspired overview of God’s redemptive plan?  (I was too sleepy to follow the sermon, anyway).

We shared breakfast afterwards, and by 9:00 I was standing on the train platform waiting for a ride back to Vienna — church bells ringing out over the wintry scene, backpack laden with gifts from Angelika (homemade Easter bread, jams, and a bottle of eggnog), and a whole day of celebration still to come!

Our service at New City Wien was special, too.  One thing I really appreciate about the church is that the music minister encourages me to include whatever classical music I’m working on.  So prelude and postlude were snippets of Schubert.  A soloist also sang “I know my Redeemer Liveth” from the Messiah (in German!).

A potluck after church was festive and leisurely.  Then, a couple hours at home for a nap and more cooking (I was feeling quite domestic, what with hot-cross buns and a quiche emerging from the oven on Saturday and spruced up brussel sprouts appearing on Sunday) before an evening potluck with my roommate and other friends, hosted by a family from church.

…This year I found myself really looking forward to Easter — wanting to celebrate intentionally, maybe even extravagantly.  As N. T. Wrights asks, “Is it any wonder people find it hard to believe in the resurrection of Jesus if we don’t throw our hats in the air?”

My friend Alexandra (the Russian TA at Keimgasse) hosted a Russian evening at her place a couple of weeks ago.  Three of the Russian teachers, Alexandra’s flatmate (another Eva), her mom visiting from Moscow, and I enjoyed getting acquainted over an array of typical Russian fare.  Definitely some new tastes, whether or not we were brave enough to try them all — salted herring or caviar with vodka or champagne (I didn’t know herring could be good, but it was practically delicious after a taste of vodka), Russian salad (a very mayonnaise-y affair), Borscht (Russian soup), and cabbage “pie” (better than it sounds).

Since my last post, I’ve heard back from the Austrian-American Educational Commission with the good news that I can stay on as an English teaching assistant for next year.  God willing, I’ll remain at my main school in Mödling, as well as at a new school in the neighboring town of Guntramsdorf.  So, the adventure continues.

As far as this year goes, things are winding up toward the end of term.  I finish at the end of May, although school continues through June.  The 8th form (12 grade) students are madly preparing for the Matura, the graduation exam that is the talk of the whole year.  Each student has spoken and written tests (3 or 4 of each).    The written tests are in mid-May (I’ll be busy trying to parce minutia of English grammar for the teachers grading stacks of exams), and the spoken exams in June are in front of a committee and are open to the public.

The end of the school year also means saying good-bye to TAs not staying a second year.  The three I’ve gotten to know best will be returning in June to the U.S., England, and Russia.

The spring weather has brought people outdoors in droves…taking walks, sampling gelato, watching the Vienna marathon.  It hardly feels right to soliloquize in the wake of the Boston tragedy, but I’ll just say the event here was everything a marathon is meant to be — glorious spring weather; a wonderful variety of people running and watching; a celebration of perseverance; and, to my amusement, even classical music piped in along one section of the route.  (Maybe if Mozart makes you smarter, Strauβ makes you run faster.)

…Speaking of spring, who wants to be sitting in front of the computer?  (Sorry, Kiwi readers.)  So, I’ll stop with an excessive word count of 1097 and conclude for now with a couple of photos of spring come to Vienna. 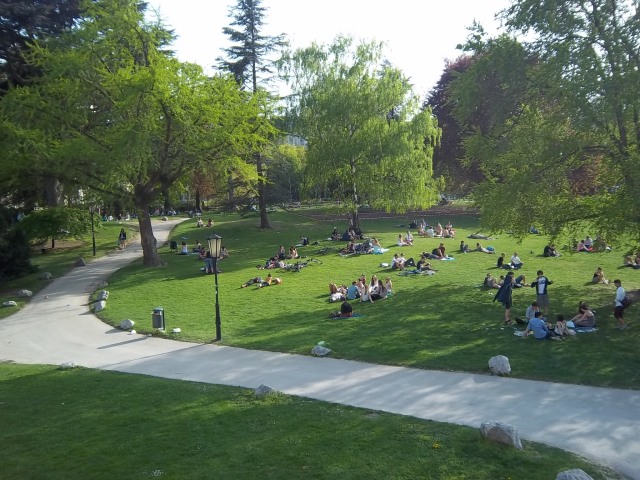 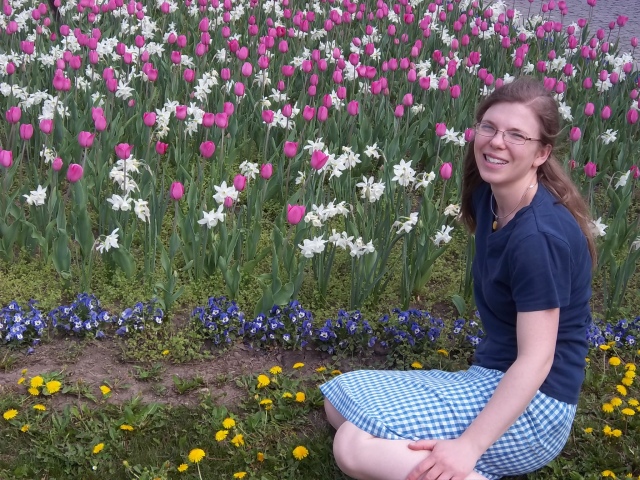