Posted on 5 January 2020 by evaholder 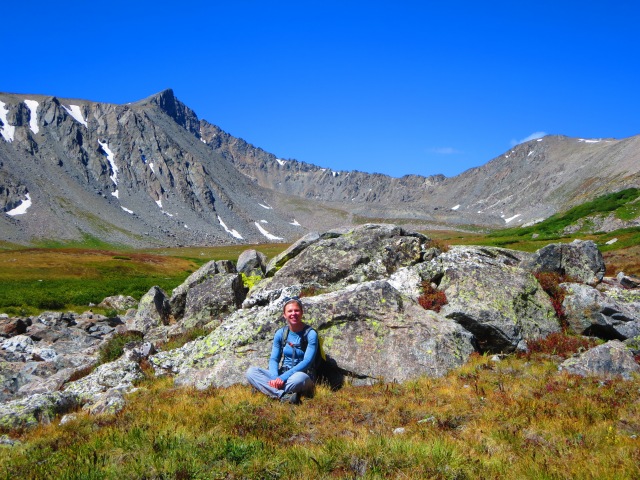 Over the summer, a friend asked me what makes me most happy. The answer was easy:

Not every day is one blessed with getting to do what makes one most happy, but what about a whole week of combining two of those things! 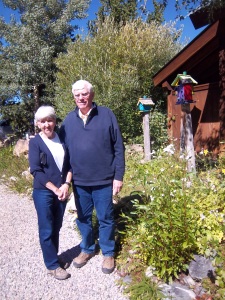 In early September, Hannah and I flew out to Denver (side note: Southwest Airlines is amazing – friendly staff, unusually relaxed atmosphere, two checked bags allowed, and they even still give you drinks and snacks on domestic flights!) to spend a week with dear family friends Bob and Claire. They have known us since we were born (and our mom before she ever met our dad)! So, there is a lot of history to this friendship, which makes it extra special.

With a week together in the mountains, there was time for all sorts of good things. Plenty of topics of discussion – books, catching up on their family (children, grandchildren, great-grandchildren), and appreciating the unique gift of being able to talk about our dad and mom with people who have known them longer than we have. (Mom met Bob while working for a high school sports magazine – I still can’t imagine her finding the topic remotely interesting, but she did make lifelong friends there!)

We played games, got our fill of politics watching one of the Democratic debates, shared delicious meals, listened to wonderful travel stories, shared book suggestions. 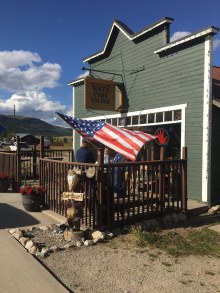 We enjoyed dinner at the highest pub in the Western Hemisphere and perused the magical photography of a local Breckenridge artist. There were long drives to see mountain vistas and catch sight of the first golden leaves appearing on the aspens and (especially on my end) straining to spot a moose in any boggy patch with lots of underbrush. Here, maybe?! 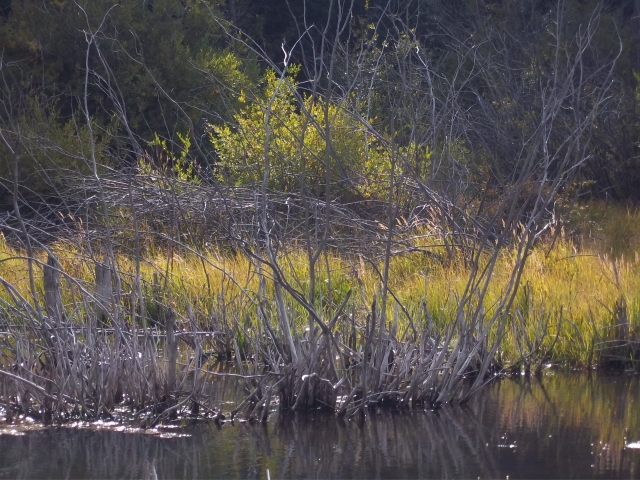 Then the hiking! Hannah and I were both keen to get in some good hikes, and our hosts insisted on being our “Sherpas” (their word!) for the week – dropping us off at trail heads and picking us up at an agreed upon times.

On Monday Hannah and Claire and I chose a trail nearby – a series of lakes and a landscape dotted with discarded mining equipment. Claire opted for a shorter version of the hike, choosing to set up her watercolor materials and then take a leisurely pace back to the car. Hannah and I got to six or seven lakes, enjoying the sparsely populated upper trail and the rugged peaks forming a ring around the high basin we were hiking in. We managed to hear, and then see, a small rock slide – fun from a safe distance. 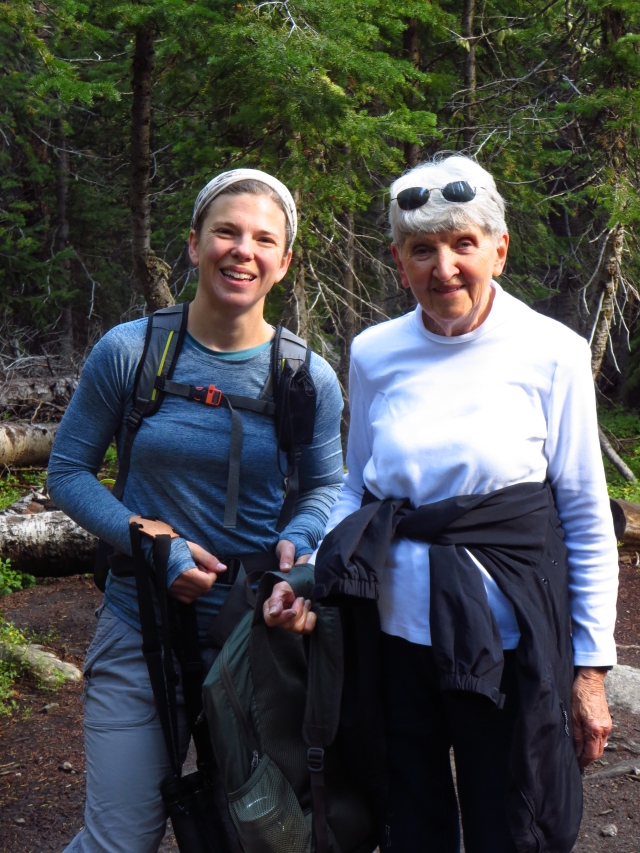 On Tuesday Bob and Claire had to drive back into Denver for the morning, so they dropped us off (not exactly on the way!) at the pass where we could head up Mount Bierstadt, one of the nearby 14ers. (I found the name rather amusing – but rather than a nickname for Munich and its famous Oktoberfest, apparently Mr. Bierstadt was actually an American landscape painter.) 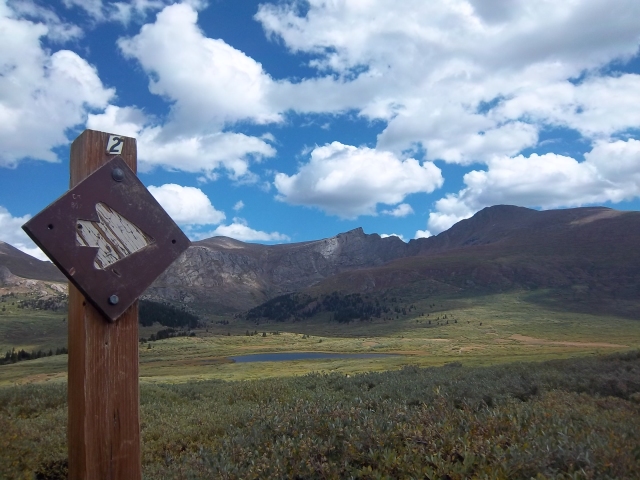 What a great day!!! Unlike some 14ers, you could see the peak from the parking lot – no false summit on this straight-forward mountain. Around 9:30, we stopped for our first snack break; wow, did leftover pizza taste amazing! (Side note: If you are ever on I-70 heading west out of Denver, do stop in Idaho Springs for Beau Jo’s pizza, with their signature combination of honey drizzled on the thick crust!)

We got to the peak around 11:00, sharing the 360 degree views with a number of other happy climbers.

It’s funny how hiking a mountain becomes a momentary bonding experience for people who have never met and will probably never meet again. We enjoyed meeting a guy who was hiking his first 14er, as well as someone who had hiked all 50+ of them.

Everyone on the peak was treated to a special sight – a fantastically fast Air Force jet flying by at eye level. As Hannah said, it was so close we practically could have seen the pilot if we had had time to think. We heard the jet before we saw it; he waved his wings (in greeting?) as he hurtled by.

On Wednesday, we took an aspen-lined drive up to Boreas Pass. Claire set up her watercolor painting supplies, and Hannah and I took a short hike in hopes of finding mountain goats. We didn’t find any goats, but I did find the most alarmingly huge grasshoppers (that looked like they had gotten their gene pool mixed up with cave crickets – ugh!) and very strong winds. 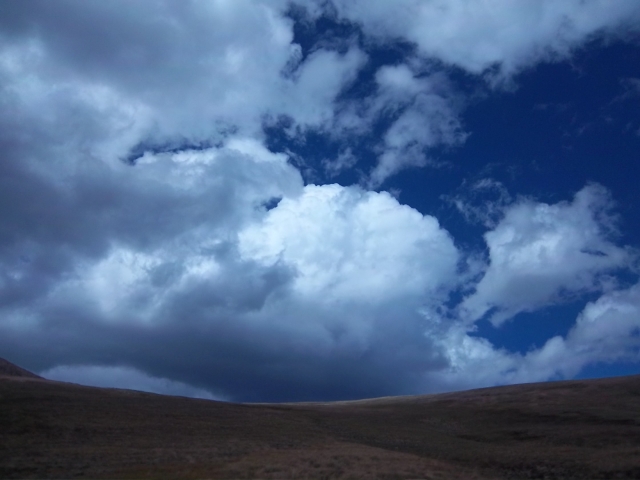 On Thursday, we woke up to find that the higher elevations had been dusted with snow, which was quick to burn off with the morning sun. Our hosts had suggested a particularly scenic section of the Colorado Trail, 12 or 13 miles of the 400+ miles that stretch from Denver to Durango. 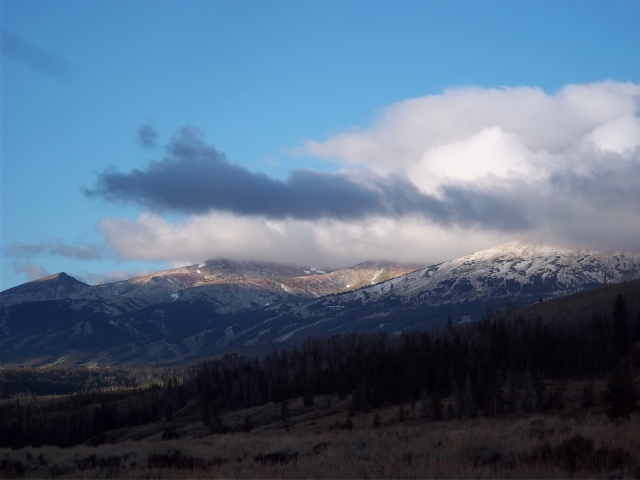 Starting and finishing for the day…. 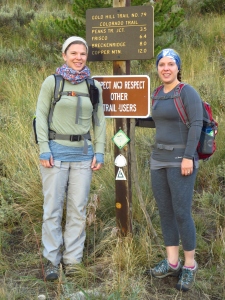 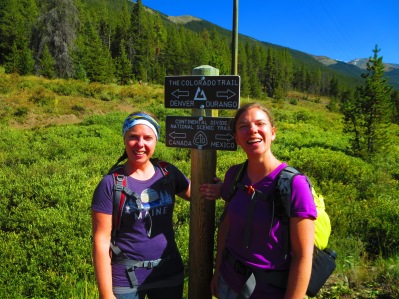 Despite ongoing logging efforts in the area (what seemed to be a mulching industry, aimed at the pine trees affected by the invasive beetle species), it was indeed a most scenic hike! We found the area that had suffered a forest fire in recent years particularly intriguing – blackened trunks and logs intermingled with colorful wildflowers, and vivid green grasses edging a tiny brook. 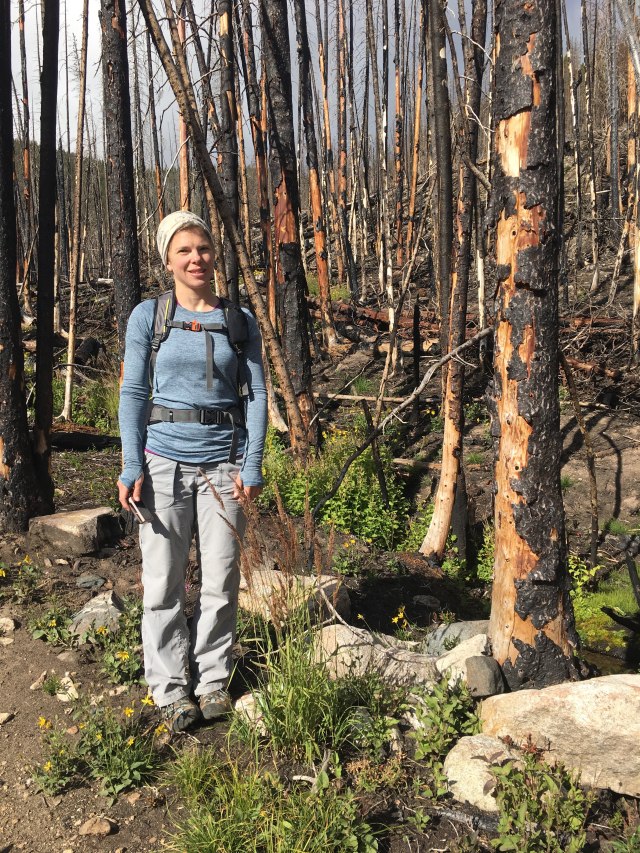 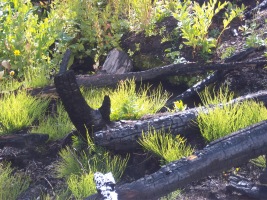 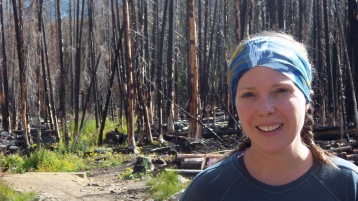 Further up, we encountered a bit of snow incongruously adorning the flowers and greenery, and eventually we made it to the ridge of the Ten Mile Range, with expansive mountains views off both sides of the Continental Divide. 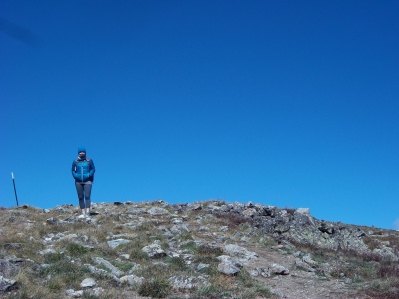 The trail was not very heavily trafficked. For the first while, we leapfrogged with an odd hiking pair – a fairly seasoned-looking young Swede and his younger Alabamian companion, both aiming all the way to Durango. The guy from Alabama, we decided, had never been to the Rockies before. He would stop and take pictures, then run ahead to catch up. At one point, somewhere around tree line, we heard him up ahead let out a joyful whoop, apparently in sheer delight at the grand surroundings. Did he ever catch up with the Swede?

By Thursday evening, we were both pretty happy with the week’s hiking log, though I was still game to use our last full day for another 14er. As it turned out, Hannah was more than happy to let me bag Quandary Peak, which she and Peter hiked two summers ago. Because it’s a very well-traveled path and an uncomplicated trail, no one put up any resistance to my hiking alone for the morning. Boy was I happy (and a bit nervous).

Bob and Claire and Hannah all got up early to drive me to the trail head by 7:00. To my great delight, just above tree line, a small flock of mountain goats topped a ridge and aimed straight for the trail! They were quite sure the trail belonged to them, idling along it without any sign of hurry.

Just after 9:00 I got to the top. If the wind hadn’t been so cold that I couldn’t stop shaking, it would have been a great spot to hang out for a while with a good book. Views all round and bright morning sunshine and plenty of trail food and no need to hurry down. 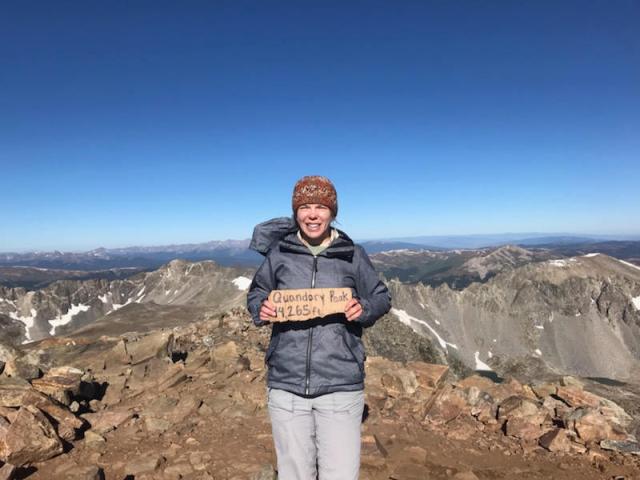 It was fun to chat with folks along the way. There was a guy celebrating his 60th birthday, a batch of guys looking a bit more winded that their general state of health appeared to merit (but at least one of the crew had flown in the previous night from New Orleans – talk about setting yourself up for altitude sickness!), and a French dad and daughter who were taking a day trip with friends from their home in Denver.

I got down just before 11:30 – a mighty short day compared to our first 14er as a family, which took over 14 hours! From the trail head, we drove over to a nearby reservoir, again in hopes of sighting mountain goats. What should we find arriving at the parking lot, but a young, lone goat just waiting to show off! He was obviously accustomed to humans and seemed happy to display his agility and model his good looks. 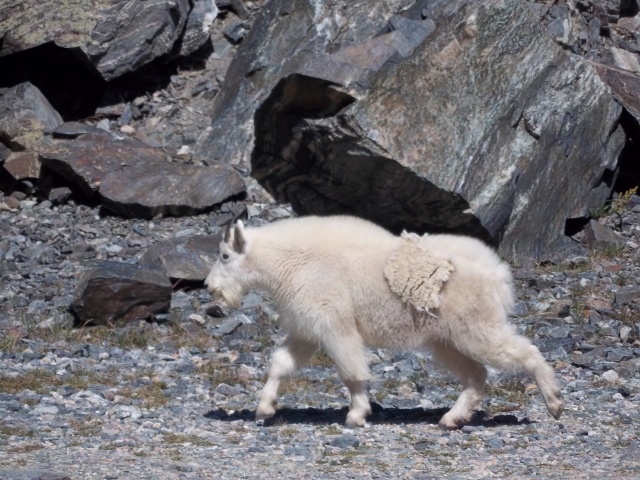 He was pretty social, too — Bob caught him acting as if he was keen to be our new pet: We finished off the week with another stop for pizza in Idaho Springs and then a great cup of coffee at Sapor Coffee, run by Bob and Claire’s grandson and his wife.

What a wonderful week!